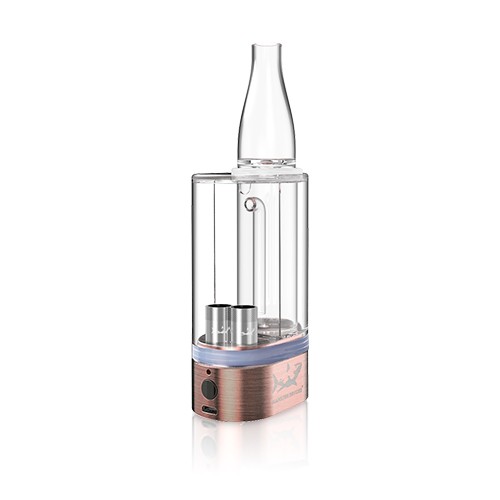 The perfect cross between a cartridge vape and a bubbler!

Hamilton PS1 Vaporizer Kit is the big brother to the Hamilton KR1 and boy does it kick butt. This device features the ability to be used with 510 cartridges or with concentrates via the wax atomizers it comes with. However thats not all, the device has a bubbler attachment which is something we have never seen with a vaporizer so far. The glass bubbler attachment can be filled with water and then is inserted into the chamber opposite from the 510 threads. This will allow the user to enjoy their 510 cartridges or concentrates with a much smoother hit as the bubbler will allow for the vapor to be defused rendering it easier on the lungs. The PS1 has a built in 1100mah lithium ion battery which is more than enough for an entire day of vaping. There is also a LED battery life indicator to let you know when you need to recharge the device. Recharging is done via the Micro-USB Port located at the base of the device. You can power the PS1 on/off via 5 clicks of the power button. This device has the ability to adjust voltages with 3 preset settings which are Blue-3.2V, White-3.6V, Red-4.0V. Switching between settings is done with 3 rapid clicks of the power button. With the ability to use two 510 cartridges or two concentrate atomizers at the same time the Hamilton PS1 packs a serious punch. This device is perfect for those of you that 1 simply just isn’t ever enough for.